The populations of this riverside insectivore, which is endemic to the Iberian Peninsula, have undergone a significant decrease and it is in danger of extinction in some regions. What is more, this regression reflects the state of deterioration of the habitats it lives in, which means that support from the Nature 2000 Network and on-site improvement activities at the habitats will improve the overall condition and quality of these places. 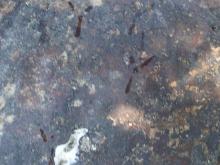 The LIFE+ Desmania project for the conservation of the desman, passed by the European Commission in 2012, involves collaboration from 8 national and regional (Extremadura and Castile and Leon) bodies, and has the following aims: