The Iberian desman (Galemys pyrenaicus E. Geoffroy Saint-Hilaire, 1811) is undergoing a profound reduction in its population size according to the latest studies. The species is now less numerous in several river basins and has even disappeared to the point of being considered extinct in many others. In those where it can still be found, there are data showing population loss not only in terms of density but also in the number of river courses and habitats they occupy. 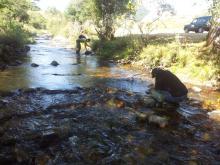 In the province of Salamanca it has been confirmed that the species has disappeared from many river mouths along the Duero basin. Although its state in other potential basins is not known exactly, it is present in the Tajo basin. Not all potential basins in the province of Zamora have been assessed and studies carried out to certify data in the Sanabria area indicate its regression and even its disappearance from some sub-basins. It is in the province of Leon that the greatest number of population are predicted, although historical data are very old in many cases, which means that there is a need to discover the real state of populations in the area. In the province of Caceres, they are found in several clusters within the Sierra de Gredos and Valle del Jerte Sites of Community Importance (SCI).

The Galemys genus is an endemism (unique to its geographic location) on the Iberian Peninsula and catalogued by the International Union for the Conservation of Nature (IUCN) as vulnerable. This is the same category that is found in the Spanish Catalogue of Threatened Species, except for in the Central System, where it considered to be in danger of Extinction, which is also the case for the region of Extremadura. The species has disappeared from many areas of its historical distribution, and is showing a regressive tendency that calls for a rapid response from public administrations, not only to reverse the population trend but also to reduce the threats that affect the species and the habitats in which it lives.

For this reason, rapid intervention into the non-natural causes that significantly affect the species and its habitats would, without doubt, avoid the disappearance of such an ancient endemic genus from the Iberian Peninsula and so stop the loss of genetic variability and biodiversity. That is why the actions proposed in this project seek to complement existing knowledge on the species so that the necessary measures can be applied for its conservation. Otherwise, there is no doubt that the species will continue its regression until it disappears altogether.

The project proposes urgent conservation action on the characteristic habitat of the species. Such action to improve the desman’s habitat will result in improvement not only in the conservation of the species but also in the rest of the flora and fauna associated with it. Action on riverside habitats such as the first line of woodland, known in Spanish as the aliseda, will have an effect by increasing the benthic macroinvertebrates, which will favour the presence of species of ichthyhofauna, which, in turn, will have repercussions on sports fishing and other activities. This will lead to complementary added value and an interest for the population in general. Activities to improve the connection of habitats along and across rivers will allow different desman populations and those of many other species to join together as well as allowing the water balance along the river courses to be recovered.

Likewise, the techniques used to undertake these activities will serve as a model for later action in other areas facing the same issues, not only in reference to the desman but also for similar concerns, which means it will be possible to extend them to other areas, in the same region, in Spain, and also throughout Europe.